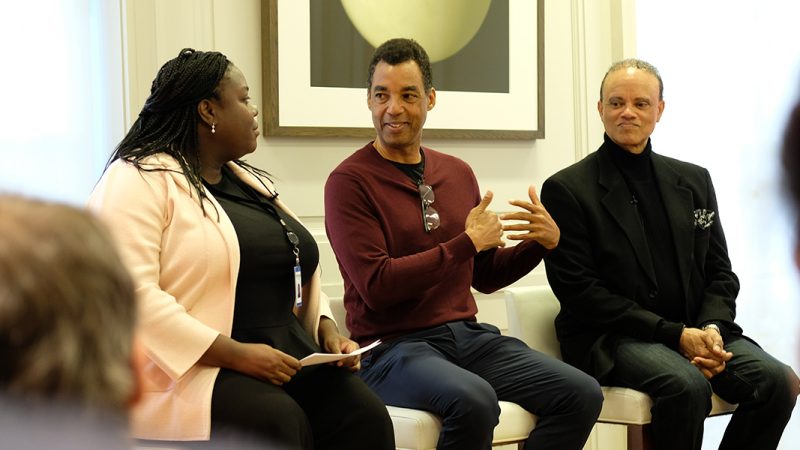 Starting on June 1, 1921, in the Greenwood neighborhood of Tulsa, Oklahoma, nearly 300 African Americans lost their lives. Forty square blocks of homes, hospitals, schools, and churches were looted and burned to the ground, leaving nearly 9,000 homeless. The area, which was once the home of hundreds of bustling African American businesses and popularly known as Black Wall Street, had been wiped out in a matter of days.

Unfortunately, this racially motivated destruction of a once-flourishing community has been largely forgotten in our national consciousness. However, as we approach the centennial anniversary of the massacre, the City of Tulsa has launched a new project that seeks to raise awareness of the historic massacre and celebrate its historically significant Greenwood neighborhood.

Through “The Greenwood Art Project,” MacArthur Fellow Rick Lowe will work alongside local artists to bring the story of the Black Wall Street to light. In creating a series of art installations located at significant sites throughout the historic district, Lowe and his team hope to tell a story of vulnerability and resilience.

We sat down with Lowe during Black History month to discuss the racial and economic disparities that still exist in the area today, the power art can have to bring communities together, and the importance of reconciliation.

What sparked your decision to work with a team of local artists on this project?

One of the most beautiful things about this project, to me, was the potential for community engagement. I came to this process saying that I will bring my vision, my experience and leadership and understanding of how art works in the public realm and help try to create a framework. But what I needed, in order to really contextualize the issue and make this project meaningful, was input from local artists. These people eat, sleep and breathe this community, so ultimately, they have a better idea of what will be most impactful and long-lasting.

How do you aim to use culture to drive community revitalization through your work?

I am a trained painter originally, but I shifted my practice in the early 1990s in an attempt to address more directly the pressing social, economic and cultural needs of my community. Alongside a group of incredible artists, we organized the purchase and restoration of a block and a half of derelict properties in Houston’s 3rd ward, which is a predominantly black community.

This project, which later became known as Project Row Houses or PRH, served as an anchor for a community that was eroding. Art exhibition spaces cropped up for emerging artists and we established arts education programs for kids and organic gardening and all of these things that gave the community the boost it needed. We worked with local artists, churches, residents, urban planners – you name it. The project has expanded to cover a six-block area, and it preserves the historic district’s character in the face of gentrification, something that is very important to me.

Since then I’ve worked on the Watts House Project in LA, a post-Katrina building effort in New Orleans and a community market in Dallas. Socially engaged art-making can provide so much to the communities they serve and I am inspired by the work of the artists around the country who do this every day.

Why did you select this particular project to commemorate the Tulsa Race Riots?

The story of Black Wall Street is already one of triumph and tragedy. By creating the Greenwood Art Project leading up to the 100th anniversary of the Tulsa Race Massacre, we have the opportunity to establish a future of prosperity, reconciliation and unity – a narrative from which every city in America can learn.

As I spent time in Tulsa and talked to people, I could feel there was still a bit of anger. There was still a bit of shame, a bit of guilt and just a lot of emotion around this issue. Hopefully this project will be able to bring some of that to the surface in a productive way as the community tries to move beyond it, by honoring the history and the people of this neighborhood rather than pushing them to the side. This specific project is a great entry point for a conversation around the economic conditions of African American communities, the displacement of African Americans and the loss of histories. It is a great opportunity for us to bring that back to the forefront, not only for Tulsa but for the rest of the nation.

How can the arts be most effective in honoring and celebrating a community?

The arts are a powerful tool through which to access our histories. The arts provide people with an outlet to tell full, complete stories, even if they are painful or ugly. From those stories, we can honor the good and the bad and we can create works that are representative of both triumph and struggle.

I can’t think of a better outlet in the world to honor and celebrate a community than public art. Public art says, “I am here. Despite my pain and misfortune, I am here and I am not going anywhere.”

What do you hope the Tulsa community takes away from this project?

Telling the story of Black Wall Street is not just important for Tulsa, it is also an important moment for our country. On that note, I hope that both Tulsa natives and all Americans realize that we are at a time in America where hate is becoming normalized. It has become comfortable for people to assume the worst about other people because of a disagreement or because they’re different.

The massacre in Tulsa’s Greenwood neighborhood is a reminder of what happens when that hate is allowed to go unchecked. It can destroy the hopes and the dreams and the hard work of good people. So, what I hope this project does and what this place becomes is a reminder of the resilience of those good people and their ability to come together after a remarkable tragedy and transcend hatred. This is about reconciling with the past and allowing it to inform a better future.

The art of hope: Exhibit brings artists together to examine past, future of Greenwood

‘Through Art, I Hope That We Can Make One Tulsa’